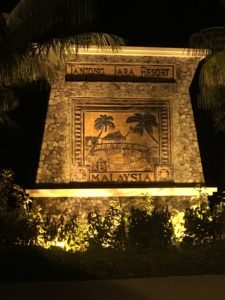 Monday morning was sad. We loved KL and didn’t want to leave. But what awaited us was turtles, beach, pool and relaxing. Now I’m not a beach or sunshine person, so I had my reservations. Literally I was wrong about everything. After a quick 50 minute flight with AirAsia aka zero leg room airlines we landed at Kuala Terengganu airport. Like in KL, they have a taxi counter and they understood what we meant with our rambled variations of Tanjong Jara Resort, we paid our money and hopped in a taxi. About 30 minutes in and after making phone calls, the driver tells us there is a problem with his car, but not to worry because his friend would pick us up and take us the rest of the way. My reaction? “I’m going to die. This is like Taken, but worse”. Liam Neeson wouldn’t save us this time. Luckily he pulled in to a busy petrol station and his friend arrived in a licensed taxi, he apologised a lot and off we sped. Literally. Whilst they have nice big smooth roads, people still drive like maniacs. I’m not certain if there were speed limits or not. But we got there alive so it was fine. 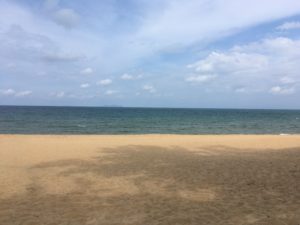 On arrival at Tanjong Jara, they chime the gong to signify your arrival. Out we stepped into the heat and humidity, our suitcases whisked away and we were seated in the open air lobby and handed some rose lemonade and sweets (plus cold towels because DAMN it was hot). Our room was ready on arrival so we were taken for a tour of the resort (swanky) and led to our rooms. Basically the best place I’ve stayed. 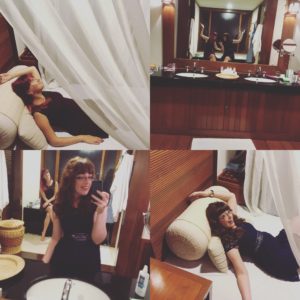 Whilst we had a twin room comprising of two single beds, we also had an extra day bed, a walk in wardrobe and a bathroom bigger than my flat’s lounge. Two sinks and a shower big enough for about ten people. Not too shabby. Worn out from our early start and travels, we headed straight to the beach to chill for the afternoon. Now, one thing you should know about the resort. Where it sits geographically means that whilst it’s nice and hot (and humid), it is also prone to rain. I spotted the signs and headed back to the room. Lisa was less lucky and got a bit wet. 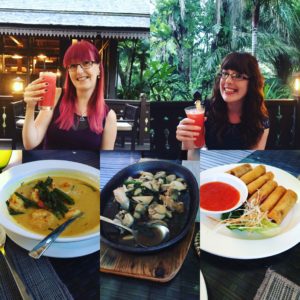 That night we went to their restaurant for our first dinner with Chef Ann. She comes over and chats to you about the menu and asks what you like and don’t like to recommend dishes. My prawns in a spicy coconut sauce was lovely, with crispy spring rolls on the side and a portion of fluffy rice. Add some yummy cocktails into the mix and we were very happy. After dinner was the main event – our first turtle release (and struggling to get into hammocks)! So, the reason we visited this resort is because Emma (Lisa’s sister that joined us in KL) was volunteering for the Lang Tengah Turtle Watch programme which is based on the resort’s beach. 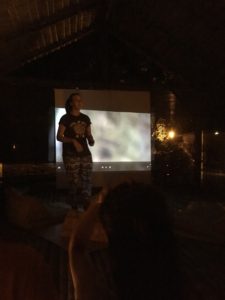 Local men comb the beaches at night and rescue any eggs from poachers looking to eat or sell the eggs, and the volunteers monitor them and release them when they are ready to go. After a very professional talk from Emma about the programme and why we need to look after turtles, we headed down the beach in the dark to the special track they had built to help the turtle on their way. I don’t think there is anything better than a bucket of turtles making their way down to the sea. 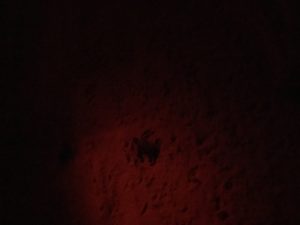 Due to magic (magnetite) in their brains, when turtles are released their internal GPS sets to their location so when they come back to breed in 20-50 years time, they will come back to that exact beach. It’s all very exciting. So high on turtle fun times, we headed back for a well earned sleep. 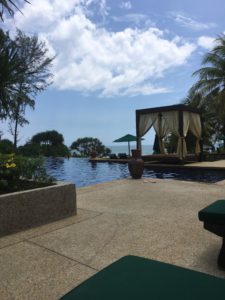 Tuesday was spent chilling by the pool, drinking beer. The pool was beautiful, our second infinity pool of the holiday but this time looking out over the beach. Warm water made swimming around completely bearable. Then the rain came. And BOY did it rain. We didn’t duck for cover quick enough so we were drenched fairly quickly. So we did what all responsible adults do in that situation. 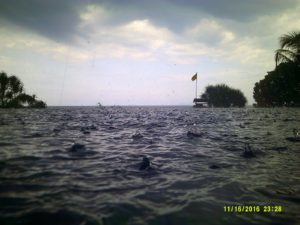 Shove our bags onto the sun loungers and covered them in towels, then dive bombed into the empty pool. The rain storm cooled the air down, so being in the warm water was really nice. After an hour of playing in the rain, it calmed down enough to run back to our room and take shelter on our patio. A second dinner with Chef Ann rounded off our chilled day – this time spicy black pepper beef, chicken satay and of course more spring rolls. Catching the end of happy hour, we grabbed some cocktails and headed back to our room for a game of ludo that we acquired from the front desk. 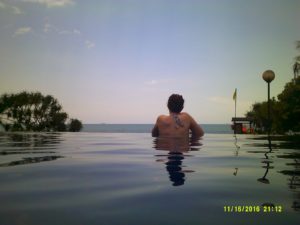 Wednesday was spent in a similar vein, except this time I ventured out alone after breakfast and was the first person on the beach. I think I finally understand what relaxing is. Hiding my sunburnt shoulders under my t-shirt, I ventured into the sea as we had plans to go snorkelling, and I’m a bit on the scaredy cat side when it comes to the ocean. And swimming. 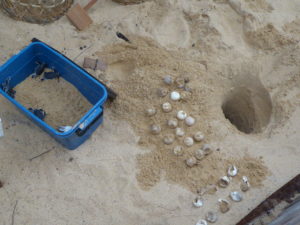 And open water. And sharks. I admit, there are no sharks where we were, but having watched The Shallows a few days before heading out left me a bit nervous. But it was perfectly pleasant, listening to the sounds of the waves, under my sun umbrella and reading my book. I could have stayed there forever. 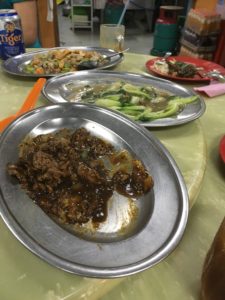 The afternoon drew us up to the pool where we booked our snorkelling trip (more on that below). We also ventured out to see Emma in her turtle hut and were rewarded by being allowed – after copious amounts of hand sanitiser – to hold teeny tiny newly hatched green turtles. Worth every minute we spent on a plane. They are so strong! Riding high on turtle love, we ventured outside of the resort and walked up the road to CB Wee – a local Chinese restaurant. For £9 between three of us we go: black pepper beef, chicken and cashews, mixed veg, fried rice, noodles, four iced teas and a beer. And, scandalously, the black pepper beef that cost £1 was so much better than the expensive stuff at the hotel. Well worth the short walk. Later that night as we snuggled up in bed, the heavens opened and we didn’t sleep until about 3am due to the torrential rain, thunder and the lightning that hit so close by the room shook. 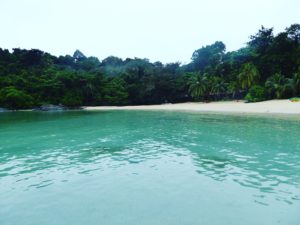 We grumpily awoke on Thursday and after a quick breakfast and issues with contact lenses, we hopped in the mini bus and headed down to our boat that took us on the 45 minute ride to Tenggol island. It was beautiful. We pull into the bay and wade through the shallows to the beach. After dumping our things at the cafe, we donned our snorkels and waded out. Now, at this point, I was scared. I’ve tried snorkelling before and kept hyperventilating and freaking out, so that combined with my dislike of swimming, swimming in the sea, swimming in open water, swimming in deep water and fish – I was reluctant. 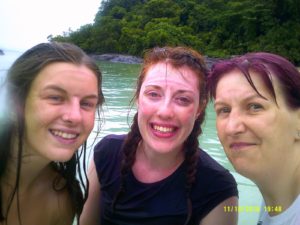 But I also knew I’d regret it if I didn’t. So whilst we were knee deep and before we reached the coral aka the point of no putting your feet down, I plunged my face in the water and taught myself to breathe. Turns out it’s much easier when the snorkel is attached to the mask and there’s interesting things to look at. And I was off. Highlights: watching grown women be super excited by clown fish and being sad I’d only seen one reef shark, to then have two swim a foot away from my face.

After an hour of swimming, we headed back to shore for our lunch and a chill out. Then it was back on the boat to go out into deeper water to go on the hunt for a Hawksbill Turtle that is known to live around there. Sadly, we didn’t see it (because Emma was there) but I swam in super deep water and only panicked about a shark attack once, so I think that’s a win. 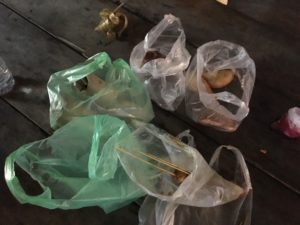 After a long boat ride home, a hot shower and a dry change of clothing, we headed out to conservative Dungun for the night market. Very different to the night markets of Laos, this basically centred around food. Plastic bags of chicken satay, spring rolls and coconut rice wrapped in leaves that was sticky and gooey and delicious. Sadly we could not stay long as we had another turtle release to get back for! After the turtle release, we decided it was only right to end our trip with happy hour cocktails on our porch. 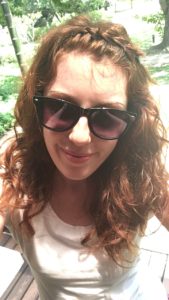 Our final day saw us not having to leave until later afternoon, so we chilled by the pool and listened to Emma’s turtle speech before heading back to Terengganu. In KL we stayed at the airport hotel – slightly less luxurious than we were used to. A dinner from 7/11 of crisps and beer was our final meal in Malaysia. Early the next morning we awoke and headed home. On the plane I was a proper old lady and had to use not one, but two blankets. Because I’m so old now. 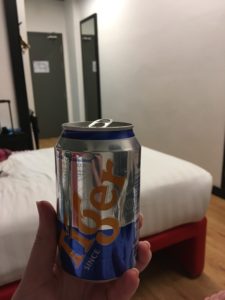 So concluded our trip. In conclusion, Malaysia is beautiful. Super easy to navigate, pretty much everyone speaks good English, and it’s dirt cheap. I definitely want to go back and explore Kuala Lumpur more, and everyone told us repeatedly to visit Penang for the street food so that’s high up on the list for the next adventure!

For more of my pictures, check out my Twitter and Instagram. Some photo cred for above for Lisa – you can find her on Instagram and see her views on the trip on Twitter and her blog! 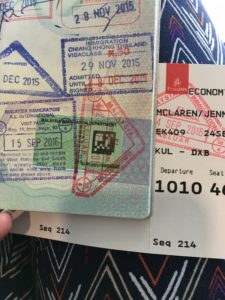