Note: I contacted Sekforde and they kindly sent me some samples to try, but as always I’ll let you know exactly what I think. 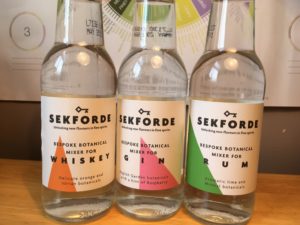 Sekforde mixers were created by husband and wife team Tom and Talula and they take a different approach to most ranges of mixers. Most ranges go for different flavours which complement different drinks in different ways, but here they have created three botanical mixers, each designed to complement a different spirit. Each mixer is 100% natural and under 40 calories per 200ml bottle. So what are they? 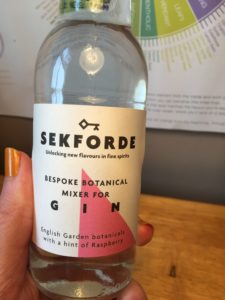 Gin
Obviously I’ve got to start with the gin mixer. This is an alternative to tonic as this contains no quinine. Instead it balances juniper with raspberry and rose for a touch of sweetness which apparently leaves a dry and leafy finish. Opening the bottle and a floral scent wafts towards you, the raspberry being quite obvious. It tastes like a raspberry cordial, quite sugary, but I imagine that mixing this with a touch of soda water would make a long refreshing drink. The boy thinks it tastes “like the inside of a greenhouse” and Leanne says it has hints of fake sugar and reminds her of a sweet from her childhood. There is a touch of leafiness to it, a hint of basil. Today we are mixing this with Juniper Green, the juniper certainly is pronounced, the boy is picking up leafy “like vegetable leaves” and Leanne is not a fan. The flavour of the raspberry is lost slightly, although there is a cloying sweetness. 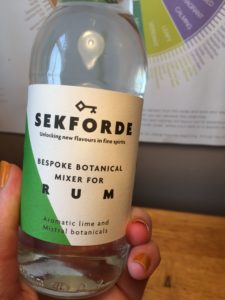 Rum
My experiences of rum drinking mostly stem from my university days of mixing cheap rum with cheap coca-cola, and now trying the neat spiced rum that is the boy’s drink of choice. This is blended with lime and green herbs with cacao bitters before ending with a hint of mint. Straight away it smells like a mojito – lots of mint and herbs come at you, but in taste it doesn’t quite carry through. The smell is great but the taste, less so. The boy is a big fan of that – although it took him a while to work out it was mint – and Leanne likes the herbiness. It is still quite sweet but less so than the gin mixer, the herbs feel fresh and earthy rather than fake essence. Mixing this with Havana Club golden rum, this smells a bit like a bad night out; I am not a fan of the taste, although I think this is more the rum than the mixer as it overpowers the softer notes. Because I believe in giving things a second chance, I add more mixer and now it is delightful. Add some ice, a squeeze of lime and a few mint leaves and this is the perfect summer drink. 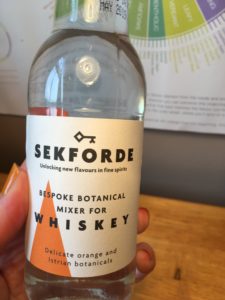 Whiskey
The final mixer in their range is designed to pair with whiskey, the mix of Sicilian oranges, bitters and the vanilla cask oak finish is made to round out the toasted malt and grain flavours. Poured into a glass, it smells and tastes just like the rum mixer with mint and herbs. I pick up no orange, bitters or vanilla oak casks. It’s delicious, but nothing like I expected. Leanne and the boy think I’m mental for not picking any orange flavour – “it doesn’t taste like orange juice, more zesty” – but they do agree that the herbs are still prominent. We are mixing this with Woodford Reserve Kentucky Straight Bourbon Whiskey and it is certainly heady. The boy and I aren’t big whiskey drinkers so we think adding a touch more mixer helps, and even Leanne who is a big bourbon fan agrees that it overpowers the mixer in a 1:2 ratio. Adding more mixer and I think this becomes delightful as the perfume is toned down. The boy and Leanne both prefer it with it when it was ‘stronger’ as they think it’s now just watering it down and you’re losing the flavour from both the mixer and the bourbon.

So, overall, what do we think? Leanne thinks the gin mixer is her favourite when neat, but then the whiskey when mixed (although that’s because she likes whiskey and thinks adding it actually loses a bit of flavour). The boy surprisingly, as a rum drinker, prefers the whiskey one as well – both neat and mixed. For me, I think the rum mixer is the best. On its own it is refreshing and you can easily imagine that as a long drink on a hot day.

You can buy the range of mixers over on 31Dover for £1.45 per bottle (at time of writing). This makes it a bit pricier than Fever Tree or Double Dutch for example, and we’re not convinced it is special enough for the price tag. Whilst we enjoyed the flavours, we don’t think they enhance the drinks enough to be marketed specifically for each spirit. Perhaps they could rebrand them as a herbal mixer, a citrus mixer and a fruity mixer? You can find them on Facebook, Twitter and Instagram.

Have you tried any of the Sekforde range? Let me know your thoughts on Twitter and Instagram.