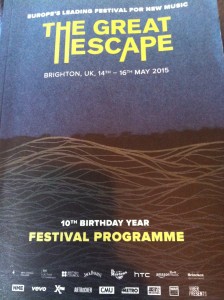 Its that time of year again. Time to put a wristband on, grab a programme and spend three days queuing running around Brighton trying to catch as many of the 450+ gigs as possible. This year is The Great Escape‘s 10th birthday, and my seventh consecutive year. Year one was a failure, I had a day ticket and didn’t understand the queuing so saw a total of two bands. Year two we only did evenings due to uni deadlines. Year three I worked at the wristband exchange, told Fyfe Dangerfield’s wife I loved him more than she did and fan girdled obsessively over the Guillemots. Years 4, 5 and 6 we successfully partied and so I’m excited for what this year will bring.

The wristband exchanged has stayed at its new Spiegeltent home and this year features an inside exchange area (perfect for today’s weather!) leading into the Spiegeltent area. Felt like a proper festival and was worried I hadn’t bought my sleeping bag. Grabbing a programme I ran back through the rain to the downstairs of Komedia for the end of the Australian Showcase. I arrived in time for Fraser A Gorman, a lad with a mighty head of hair (not that dissimilar to my fathers hair in the 70s) hailing from Melbourne. Considering it was 3pm on the first day, the room was packed and from the cheers arising from the crowd as song names were mentioned, he clearly has a following here in the UK. He kickstarted the set with “Better take your washing off the line because it’s raining” – very apt for the rain sodden city outside. Featuring catchy riffs, harmonicas and brand new tambourines, his set was good fun and got me in the mood for the weekend. Uplifting and highly bop-able.

Deciding against going back out into the rain I stayed inside for Holy Holy, which the programme describes as “huge, full band builds and crescendos, mixing distorted duelling guitars with warm, close harmonies and wild percussive rhythms.” Certainly a mouthful. As the room filled up around me and the buzz started to build, I started to think I had picked a winner. Hearing them for the first time reminded me of when I first saw Prides. Slightly blown away by the noise, and intrigued as to how much sound could come from so few people. They did indeed have full band builds and crescendos. They also had a bassist so tall I thought he would hit his head, and a guitarist that looked like Jesse Bradford in Bring It On but with Jon Snow’s hair (GoT Jon Snow, not channel 4 news Jon Snow).

So it’s now 11:30pm and I have survived my first day. After a trip home for food and Strongbow (don’t judge me) I journeyed across to Kemptown to Patterns. Which used to be Audio and now features glitterballs as its 80s name would suggest. But the bouncer fist bumped me on the way in so I’m a fan. Between that and paying £4.20 for a cider I got lost en route to the toilets and made many friends all equally as lost. Basically Patterns, sort your signage out. Patterns doesn’t help its 80s disco name with its decor. Neon blue and green on the walls, with pink fluorescent lights and mic cables. Here I saw Jagaara, a three piece sister act with some strong eyebrow game. Half an hour of dreamy electronic pop later, I headed upstairs and caught the end of Cold Fronts who were singing Sinatra’s ‘ I love you baby’ which was both brilliant as the singer wound his way through the crowd and on to the bar, and horrible because I had Heath Ledger in 10 Things I Hate About You flashbacks (RIP Patrick Verona).  Plus I wanted to wash all of their hair.

After the ‘rock’ fest I was treated to the acoustic delights of Tenterhook. Sadly, he was ruined by the chatter going on by the bar which drowned out his singing, but he was wonderful. And wearing double denim, because, when in Brighton. He channelled his inner Ed Sheeran as he hit the high notes, and was the only act I saw tonight that didn’t make a joke about the horrible weather.

After my trip to Patterns, I went to Shoosh, That is a sentence I never thought I would say. It is as hideous as I expected. White chandeliers. Seriously. They then charged £4.50 for a bottle of Rekorderlig and she threw half of it away because it wouldn’t fit in the plastic glass. Luckily Astronomyy kicked off their set with “Nothin on my mind“. 30 minutes of catchy electro pop later, they (along with Jagaara) proved you don’t need a bassist to be great. Plus they sampled some Destiny’s Child “Say my name” which I NEVER object to.

10pm. Heading to Brighton Spiegletent. One of my favourite things about the Festival. I grabbed myself a £6 cocktail from the van (gin, elderflower, cucumber, soda and lemon – very sugary, very alcoholic) and headed into the tent for Fismoll. Two guitars and a cello. Half the crowd gathered on the floor. It’s a touch time slot. The majority of people at this time are tanked up and ready to party so for a band to hold their own at this time is an achievement. Quiet. Calming. Soothing.

Got me perfectly ready to come home and sleep (by sleep, I mean write this). So I didn’t make it to Jack Garratt, but he is playing tomorrow so all is not lost.

Don’t forget I’m on Twitter for random updates of who I’ve seen.