Note: I met Bedrock Gin at Imbibe Live and they were kind enough to give me a sample for the blog. 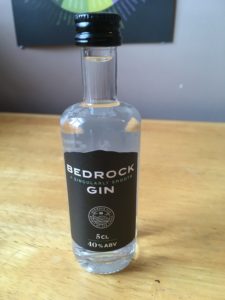 Bedrock Gin are not a new brand, as I found out at Imbibe Live. They have been going for nine years from the Cumbrian Lake District. Founder Vince Wilkins was inspired by the beauty of the Lake District, and working with a master distiller blended his botanicals with Cumbrian kiln-dried oak bark thus making Bedrock Gin. Winning silver at the IWSC in 2012 and 2013, they won gold in 2016 – winning plenty of other awards along the way. Made with 11 botanicals including citrus peel, liquorice and cinnamon, they suggest serving Bedrock with a slice of lime and a garnish of basil.

Opening my sample bottle, a hit of sugary liquorice comes first followed by a hint of piney juniper. A sip of it straight (no water, I only have a 50ml sample) and it’s quite tangy on the tongue. The citrus works well with the sweetness to balance it out but still produces a range of flavours to experience. There’s a slight burn as you drink it – but this could just be because I’m used to watering it down slightly instead of completely neat. 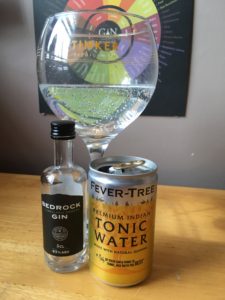 Mixed with a tin of Fevertree (because miniatures are the best things and should always go together), the sugaryness is highlighted – thanks sugar filled tonic water! Once mixed, the exciting tastes mellow out slightly, but it still has a lot going on. The fire from the cinnamon lingers on the very front of your tongue, contrasting with a sourness at the back of the throat and some sweetness in between. For once, avid blog readers, I am actually prepared and have some lime (I don’t have any basil because, hello, it’s me, but I’m half way there and that half-arsed effort is what you should have come to expect from me by now). Now that’s my kind of drink. We all know I like the citrusy gins, and the lime works really well with the flavours. It isn’t overpowering, but adds a touch of acidity to counteract the sweetness and makes it a bit easier to drink in general.

You can buy a bottle of 40% Bedrock Gin from their website for £25 (at time of writing) which I think is pretty good value. A bottle of  big branded gin isn’t going to cost you much less than that and this gives you much more than they would. You can find Bedrock on Facebook, Twitter and Instagram.