Note: I met the team behind Caspyn Gin at Imbibe Live and they kindly sent me some samples post-event. As always, I’ll let you know if they’re grim. 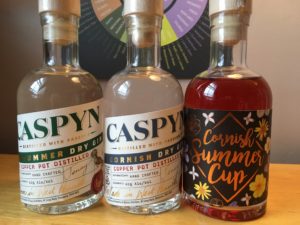 Caspyn Gin is the product of Pocketful of Stones distillery, yet another craft gin from Cornwall – this time in Long Rock, just outside Penzance. They currently produce two gins – the Cornish Dry and Midsummer Dry – as well as the Cornish Summer Cup. The original Caspyn gin is loaded with floral and citrus notes using the less regularly used botanicals hibiscus flowers, Japanese tea, gorse and lemongrass. The Midsummer version takes the original gin and infuses it with fresh English cucumbers. This leaves the gin with a slight green tinge (apparently, I can’t quite spot it). The Cornish Summer Cup is their take on the English cup (aka a Pimms to us plebs) loaded with fruit such as raspberries and strawberries mixed with star anise and wild carrot seeds. So all in all, for a small batch distillery, they’ve got a lot going on – there’s an Absinthe in the pipelines. And, more importantly, my bottles arrived with my name on them. So they’re the best. 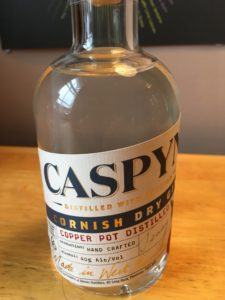 First up today is the original Cornish Dry. In the bottle it smells quite exciting, the juniper is distinguishable but amongst a host of other flavours which come out in the glass. The floral notes aren’t coming forward, but a hint of tea is just recognisable. Mixed with a splash of water the tea comes marching to the front. There’s a hint of spiciness and warmth to it. The grassyness from the lemon grass (yes, I used grass that many times in a sentence) adds a lightness to it, but the perfume from the tea is the strongest flavour here. Mixed with some Fever Tree, the perfume from the tea softens and the dryness strengthens. The juniper becomes more prominent, and I’m sad that the floral notes aren’t stronger. I do enjoy a floral gin. FYI – a slice of lemon cuts through the dryness and helps lighten it slightly. 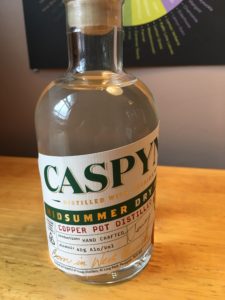 The Midsummer gin smells fresher and lighter than the Cornish dry – this will be the cucumber, a smell that drifts out the bottle towards you and for once matches the sunny weather outside. Mixed with some water, the cucumber is certainly stronger smelling and it definitely tastes of cucumber. However, as cucumber is one of those watery flavours anyway, mixing it with water doesn’t really do it any favours. Moving on, mixed up with some Fever Tree the cucumber is more balanced with the dryness of the tonic. The smell of cucumber is stronger than the taste of it, but I quite like that. Whilst I like cucumber, I don’t like when it’s a bit overwhelming. But, because it’s the done thing, I’ve garnished mine with a slice of cucumber which I think makes it slightly nicer. The fresh cucumber cuts through the dryness making it slightly easier to drink. The cucumber smell has amped up, but it isn’t too powerful to affect the taste. Good shout McLaren. 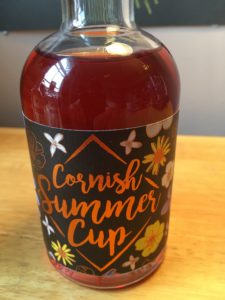 The final drink to taste test is the Cornish Cup. Shaun from the distillery recommended that I mix the Cornish Cup with ginger ale (NOT ginger beer) so I’m enlisting the help of Merchant’s Heart (more on them to come in the Tonic Taste Test series and more). It smells sweet and like summer in a glass, but the ginger ale adds a different nose to it. The ginger ale certainly gives the taste a different dimension to the usual Pimms and lemonade. It’s definitely recognisable as a summer cup style drink, but the ginger stops it being as cloying and adds a slight savoury edge to it. It’s also slightly drier, and I like that. Shaun also recommended garnishing it with soft fruit, mint and citrus. I’m off on holiday tomorrow so I have none of that, but I see how it would work. I think this would also work well with a nice cheeseboard – or perhaps warmed like a mulled wine style drink? 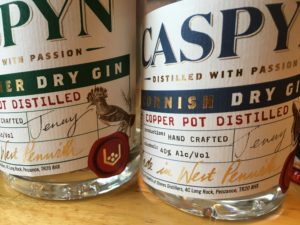 A bottle of the Cornish Dry gin is available on the Juniper Club store for £35 for a 70ml bottle – as is the Midsummer Gin. You can find Pocketful of Stones on Facebook, Twitter and Instagram.