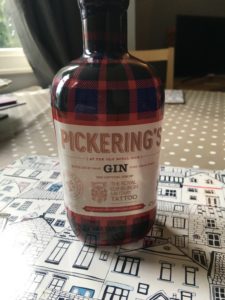 If you’re in Edinburgh, I can recommend the Pickering’s Distillery tour. Well. By tour it’s standing in one room talking all about gin, then going next door and seeing their bottling room, then back to the first room to drink gin. It’s accessed through the Royal Dick Bar (tee hee hee) at Summerhall roundabout. I went during the festival and was joined by my father, who at the end very kindly got me a bottle of the limited edition 2017 Tattoo gin. Working with the Royal Edinburgh Military Tattoo organisers, this year’s edition features indigenous Scottish heather, milk thistle, bog myrtle and Scots Pine added to their Bombay recipe gin wrapped in the official tartan of the Tattoo (not McLaren tartan though as my father pointed out…). Along with the Tattoo gin, their range features their original gin, a navy strength gin and the 1947 recipe (made precisely to their original recipe). They’re also the makers of the original gin baubles that are LITERALLY ALL OVER SOCIAL MEDIA. The bottle is lovely, they have paid real attention to the small details – the Pickering’s peacock wrapped around the bottle and a charming scale of how empty the bottle is on the side. 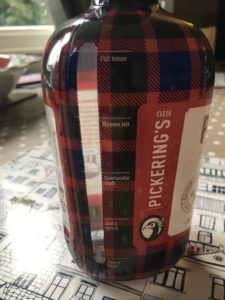 First up, my favourite thing: getting into the damn bottle. This bottle helpfully doesn’t have a tab to pull so the boy pulls the whole thing off in one go. Can’t get the stopper back in but at least it’s open. Straight from the bottle it has a hint of floral aromas to the nose with a heavy focus on the juniper. The boy thinks it smells clean and has a hint of spiciness. In the glass, the original Bombay recipe spices come out and mixed with a touch of water there is still the spice hit on the tongue. It’s quite complex and whilst the majority of the taste fades quickly, there’s a slight lingering aroma. The boy thinks it is reminiscent of a white wine…which I don’t get at all but that’s the beauty of everyone being different. So, how will it hold up against tonic? 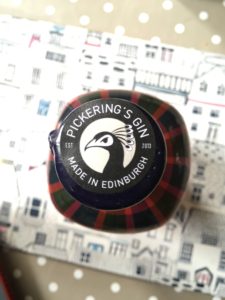 Using 50ml of gin with 150ml of Fever Tree, the spice disappears slightly on the tongue, but you still get it at the back of the throat. The savoury pine from the juniper comes more prominent. It is a very different gin with tonic. I can still pick up some of the flavours but for Russ this has lost all flavour which is a shame. Then I gave him a little lecture about why so many new tonic brands were appearing that actively try not to drown out the subtler flavours of craft gins…anyway. They recommend adding some green apple slices to this, so I add some red apple (look, I’m off to New York in less than a week so it’s the best I can do). The apple adds a hit of freshness that wasn’t there before but doesn’t greatly affect the taste. 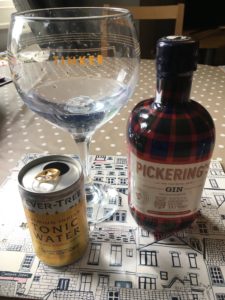 A 35cl bottle of the Tattoo gin is £20 on their website (at the time of writing) which is fair, and I think going forwards I will be drinking this straight. You can find Pickering’s on Facebook, Twitter and Instagram.