Note: Wayne from the Redsmith Distillery kindly sent me a bottle to try but I will let you know what I really think. 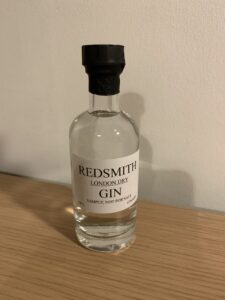 Redsmith Distillery came about when founder Wayne decided to branch out from commercial heating and pipe fitting in 2013 into distilling. With an engineering degree, Wayne decided he would build his still from hand whilst studying at the Institute of Brewing and Distilling. In 2015, he finished building his still and gave it the name Jenny – whilst I’d love to say I inspired this, it’s actually named after ancestor who was married to a Cornish copper miner. The first batch of his London Dry style gin was ready for the public in May 2016, and in October of that year won the Gin of the Year award at the Craft Distilling Expo. Wayne uses nine botanicals in his one-shot gin, using juniper, coriander, fresh oranges, bay, cardamom, rosemary, orris, angelica and cassia – they then describe the taste as “leafy salad notes” which makes me intrigued to try it, but also wary as I don’t generally like my gin to taste of salad.