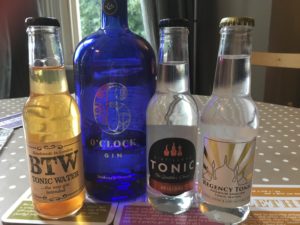 We’re made it to the third, and final (for now), part of my tonic taste tests. After testing the market leaders and the large ranges, today we try the one off brands. Namely, Regency Tonic, Distillers Tonic and BTW Tonic. 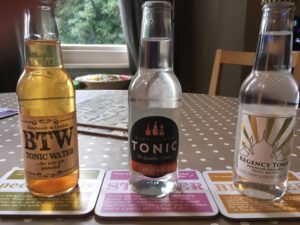 I am biased to local products so Regency Tonic is definitely my favourite. They are based about three roads away from me, so it’s the epitome of local. They produce it using only 1.3g of sugar per 100ml after taste testing 30 different recipes which includes juniper. Like most brands now say – they wanted to create a mixer that complemented rather than overpowered the spirit. Plus they have lovely labels. You can find Regency Tonic on Twitter and Facebook. 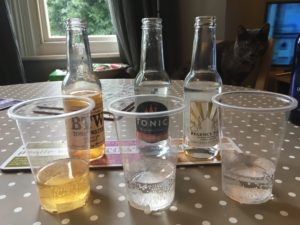 Distillers Tonic is a rebrand of the 6 O’Clock Tonic – they sold their recipe to Distillers who had a little play and created their Original Tonic (the one we’re drinking today) and a Dry version which contains very little sugar. Which says something, as their original version is already low in sugar and contains fewer calories than most tonics (their claim, not mine). You can find Distillers Tonic on Twitter, Facebook and Instagram.

Finally, BTW Tonic is handmade in London using a traditional Victorian recipe. BTW is different to other tonics because it’s not a clear liquid. This is because whilst most producers use quinine extracts in their tonic, BTW’s quinine is extracted directly from South American Cinchona bark. With no other flavours added, it takes a little longer to make but allows the spirit of your choice to shine through. BTW are on Twitter, Facebook and Instagram.

Helping me today is Russ, so let’s see how they all fare with 6 O’Clock gin… 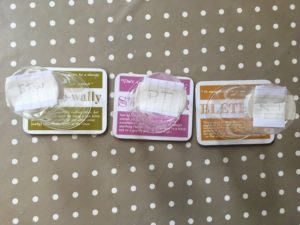 Tonic 1 – spoiler alert, we know which one this is. The colour kind of gives it away. It certainly doesn’t quite smell like a normal gin and tonic, slightly woody and musky. For some reason I expected this to be flavoured – although I know it’s not – and it is indeed just quite plain. Definitely not as sugary as some of the tonics we have tasted in the past. Russ is a fan, it’s not heavy and doesn’t leave him wanting to wash his mouth out (he isn’t a massive gin fan) and said the words “I could drink more of that”. Huzzah. We’ve found the winner.

Tonic number 2 smells sweeter and more like the tonics we are used to. Russ seems to think it smells more “naturally sugary” rather than “artificially sugary”. This one is almost slightly smokey in taste – I imagine this as more of a genever. I think if you paired this with a spiced gin it would match well. It works in that it adds an extra dimension to the flavours instead of leaving it plain. Russ however thinks the exact opposite. “It doesn’t taste like it smells, I found it more bland and more like a conventional gin and tonic.” I don’t think this tastes like that at all. I find it leaving quite a bitter taste in the back of the throat. 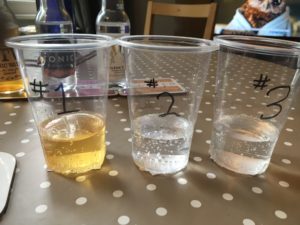 The final tonic smells most ‘conventional’ (to me at least), Russ thinks it doesn’t smell of much, “quite unassuming”. To me, this also tastes the most like a gin and tonic. The tonic is slightly bitter but not unpleasant, leaving the flavour of the gin to come through. Russ thinks this one tastes better than number two, although “I feel like I might get bored of it after a while”.

Looking at all three, Russ thinks the second tonic masks most of the flavour of the gin. I think one and three taste quite similar, although number one is drier and less sweet. I think number one is my favourite as it’s gentle and doesn’t impose a flavour on to the gin. Russ agrees with number one definitely being his favourite “by quite a margin”. Now, we know that means BTW is today’s winner, but what are the other two? Tonic 2 is Regency Tonic, which leaves number 3 as Distiller’s Tonic. This is interesting as I’ve had Regency tonic before and quite enjoyed it – although it’s different drinking it in isolation to drinking it as a comparison.