Note: I met the Doctor Polidori team and they kindly gave me some bottles to try, but as always I’ll let you know what I REALLY think. 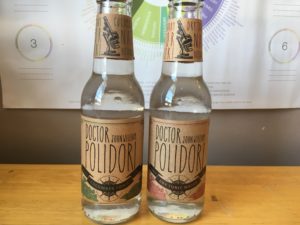 Doctor Polidori tonic comes from Germany from the same people that make Ferdinand’s Saar gin, and I think we’re all thinking the same thing. Who the hell is Doctor Polidori? To know this we have to open our history books to around the time of Lord Byron, Polidori’s client and travelling companion (and originator of the vampire-fiction genre). His records formed the foundation of this modern interpretation of tonic. They have two tonics in their range – the dry tonic which is infused with botanicals such as basil and thyme and a cucumber tonic which includes (funnily enough) cucumber extract which makes the tonic “a refreshing experience beyond compare”. So, how do they taste? 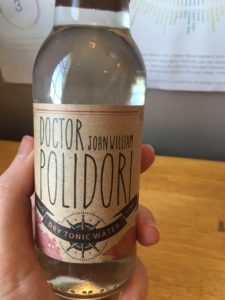 Dry tonic
Clipping off the cap, it smells like tonic although there is a depth to it. It’s highly carbonated (I should have guessed from the massive whoooooooosh that happened when I opened it) and verges on the sweet side rather than bitter. It’s definitely dry, as in all-the-saliva-has-gone-from-my-mouth dry. The sweetness is well balanced, sometimes after a g&t I feel like my teeth are fuzzy, but this doesn’t make me want to book a trip to the dentist, but also doesn’t taste of fake sugar like a lot of ‘light’ tonics. Mixed with some 6 O’Clock gin in a 2:1 ratio, the aromas from the glass really hit you in the face. The tonic does what a tonic should do, allowing the gin to come forward and shine. It adds a sweetness and a lightness from the carbonation, but generally, this is one that works. To test this, I’ve paired it with Gwyr gin – a gin with a bit more flavour and oomph to it; still using 50ml tonic to 25ml gin (don’t judge me, I have a lot to get through) and again, the fennel and spice and woodiness shines through. This is up there for me with the likes of Fever Tree. 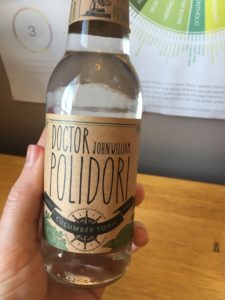 Cucumber tonic
Before I open this, I am already wary of it. Whilst I like cucumber, I’m not a massive fan of cucumber flavoured things but in the spirit of being open minded, I crack it open. It smells very cucumbery – but like you’ve just cut off a chunk of it rather than fake cucumber. This might redeem itself. Like its dry counterpart, it is very carbonated, and actually the cucumber is not overwhelming. Certainly there, but more like some cucumber has been dunked in it and then removed. Mixed with the classic 6 O’Clock again, this isn’t necessarily the best pairing, but it’s also not the worst as I can taste the cucumber over the flavour of the gin. That is the problem with a flavoured tonic, it needs a fairly generic gin to match with otherwise the tonic flavour overpowers the gin flavour.

You can get your hands on these tonics from Gin Kiosk for £1.60 per 200ml bottle (at time of writing). I would recommend trying the dry tonic as an alternative to your standard Fever Tree and Fentiman’s, but the cucumber tonic is more a personal preference. You can find them on Facebook and Instagram.