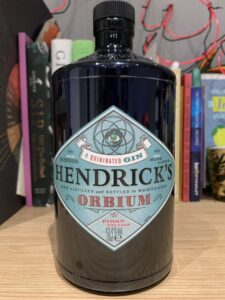 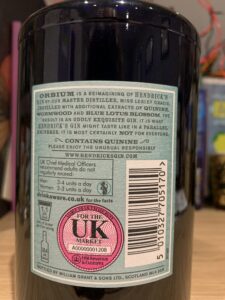 Opening my bottle and it smells a bit like tonic, but also slightly of rose – obviously they’re famous for blending rose into their main gin – and wine. In the glass, it’s reminiscent of a wet martini, it doesn’t instantly make you think of gin. Adding a splash of water allows some floral notes to come through along with a hint of that fresh cucumber. It’s very gentle to drink. Now what I’m about to say is going to sound mad, but it feels very wet in your mouth. I’m so used to juniper drying out the mouth feel, that this feels a little bit odd. As you keep sipping, that bitterness starts to become more pronounced, but it’s still soft overall.

They say to try this with soda, but for consistency I’m going to start by adding tonic to just double down on the quinine. This has changed the texture dramatically as it now feels much more like a gin and tonic, dry as a bone and leaving your mouth tingling and watering as something acidic just kicks on the roof of the mouth. Mixing it with some Luscombe soda water and I think that dampens the flavours slightly, even though both are mixed at the same 1:1 ratio. The soda water is also less fizzy than the tonic which changes the feel of it, and I think it reminds me of slightly flat tonic overall. Having sat and sipped on both whilst proofreading this, I can say with all honestly that it is far better with tonic than with soda water.

You can get a 70cl bottle of the 43.4% gin from The Whisky Exchange for £37.95 (at time of writing). I’m going to be honest, I’m not going to be rushing out to buy this. If I were to drink it again, I’d have it with tonic over soda, or try making it into a martini to see how ell that works. For that price, I can think of a number of gins I would rather buy, but then again I’m a bit of a purist and I just want my gin to taste like gin. You can find Hendrick’s on Facebook, Twitter and Instagram.