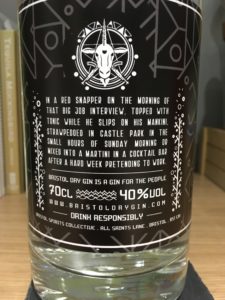 Opening my bottle (cracking label FYI) and it’s quite complex. There’s definitely something perfumed but balanced with something deep and vegetal. Sage or basil perhaps? There’s something very familiar about it, and it’s annoying me that I can’t quite work it out. In the glass, the ethanol is much more obvious and the perfumed qualities has disappeared to be replaced with the one smell I miss now I’ve moved to the country: Brighton seaside. You know when you can smell various BBQs and fish and chips, mixed with smoke and suncream and alcohol? This all tones down a bit when diluted with a splash of water and on the tongue it is surprisingly soft with hints of vanilla coming through before a smokey thickness washed over you. 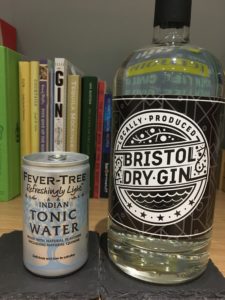 Mixed 50/50 with Fever Tree light tonic, and the flavour profile has changed. There’s a gentle sweetness to it which slowly, but then suddenly all at once (thanks John Green), hits you with a touch of sourness right at the back of your tongue which makes you sit up straight. Even though I used equal amounts of gin and tonic, I feel that this is as diluted as you would want it, anymore and the flavours would be lost. Perhaps mixed with a Mediterranean tonic it would allow the subtler, herbal notes to pick up.

You can get a 70cl bottle of the 40% Bristol Dry gin from Master of Malt for £25.95 – see the affordability there. I like what they have done. This certainly tastes different to your Gordon’s and Greenall’s, but at a level that entices people to pick up and bottle and try it. Whilst some might not like it, I think they are well flavoured and really good value. You can find them on Facebook, Twitter and Instagram.